*I am currently working my way through my fourth semester of the Information and Learning Technologies master’s program at University of Colorado, Denver.  This is the second post within a series of critiques on digital stories that I’ve been assigned to write for a course titled Digital Storytelling. 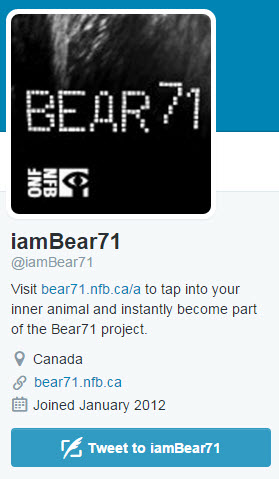 This interactive documentary, or storyworld as I’ve learned it can be called, is the true story of a female grizzly bear monitored by wildlife conservation officers from 2001-2009.  Bear 71 reimagines the bear’s story from an omniscient narrative vantage point, speaking directly to the viewer.  Participants explore and engage with the storyworld via animal role play, augmented reality, webcams, geolocation tracking, motion sensors, a microsite, social media channels (here and here), and a real bear trap in Park City.

If you have twenty minutes to do anything with today, use it to interact with Bear 71.  You won’t regret it.

***Images from here and here.