*I am currently working my way through my fourth semester of the Information and Learning Technologies master’s program at University of Colorado, Denver.  This is the seventh post within a series of critiques on various readings that I’ve been assigned to write for a course titled Digital Storytelling. 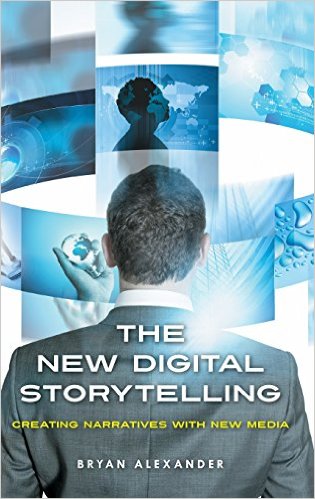 At first I didn’t think I would learn anything new from this chapter.  I feel fairly familiar with all popular social media platforms and this far into the semester, I’ve already broadened my view of what can be considered a digital story.  But I’m pleasantly surprised and pleased to have learned quite a bit.

I have never listened to a Podcast before and I found the history behind them covered here to be very interesting.  I agree that the term podcast is a bit of a misnomer in that iPod and broadcast do not accurately describe the current reality of what makes a podcast, but it’s a name that has stuck.  According to Alexander, Podcasts have three important storytelling elements:

First, they open up a range of production options: one or many speakers, prewritten versus improvisational speech, subject matter expert versus enabling speaker.  Second, they lack a way for listeners to directly and publicly contribute.  The social media aspect is therefore to occur elsewhere.  Third, the programs demonstrate the power of the human voice to tell stories without any additional sound or other media.

Alexander then proceeds to discuss, in detail, several examples of podcasts.  At first I was a bit annoyed because I wanted to know more about them as they pertain to storytelling, but then I realized his explanations of each example portrayed just how various stories can be told.  The in-depth analyses of each one did actually teach me about the different ways that characters and their interactions, single-voice versus multiple-voice, music, and various sound effects can affect the way the story is told.  I also started making a list of podcasts to listen to since I’ve never given one a try before!  (This American Life and Serial are on my list for sure.)  I do wish that Alexander had broken up the podcast section into labeled paragraphs, with the labels being the names of the Podcasts, just because I felt that the flow of this section was quite awkward.

The web video section was useful to me in that it altered how I viewed videos on YouTube.  I’m surprised, but I had no idea that there were incredibly successful video stories that spanned multiple videos!  I’m talking like over a hundred (the lonelygirl15 project)!  Of course I’ve been viewing YouTube videos as digital stories, I just didn’t realize there were extensive series out there.  I also found Alexander’s explanation of the “new” audience quite interesting:

The entire swarm of YouTube’s channels and comments, clip arrangements, and tag clusters is driven by a large audience – but that word is no longer correct.  “Audience” no longer describes this complex mix of many watchers, a large number of arrangers and commenters, uploaders and creators, with amateur and professional roles cutting across all strata.

The audience of these videos have essentially become a part of the storytelling process, something I had never considered before.  The section of the chapter was entirely new to me as well.  I’d never heard of VoiceThread before and the concept behind it seems truly spectacular.  Alexander explains it as, “It’s a unique web service, seemingly based on multimedia annotation of media documents.  Users upload images, text, or video clips, which other users can comment on with text, audio, or video.  Built in Flash, VoiceThread presents all of these functions with simplicity and playfulness.”  I looked it up and plan to spend more time there after the semester ends.

All in all, this chapter turned out to be incredibly informative and has helped shaped my world of digital storytelling even more.