*I am currently working my way through my fourth semester of the Information and Learning Technologies master’s program at University of Colorado, Denver.  This is the third post within a series of responses to digital storytelling resources that I’ve been assigned to write for a course titled Digital Storytelling.

For this week’s resource, I am writing about (or “responding to”) a TED talk by Chimamanda Ngozi Adichie titled, “The Danger of a Single Story.” 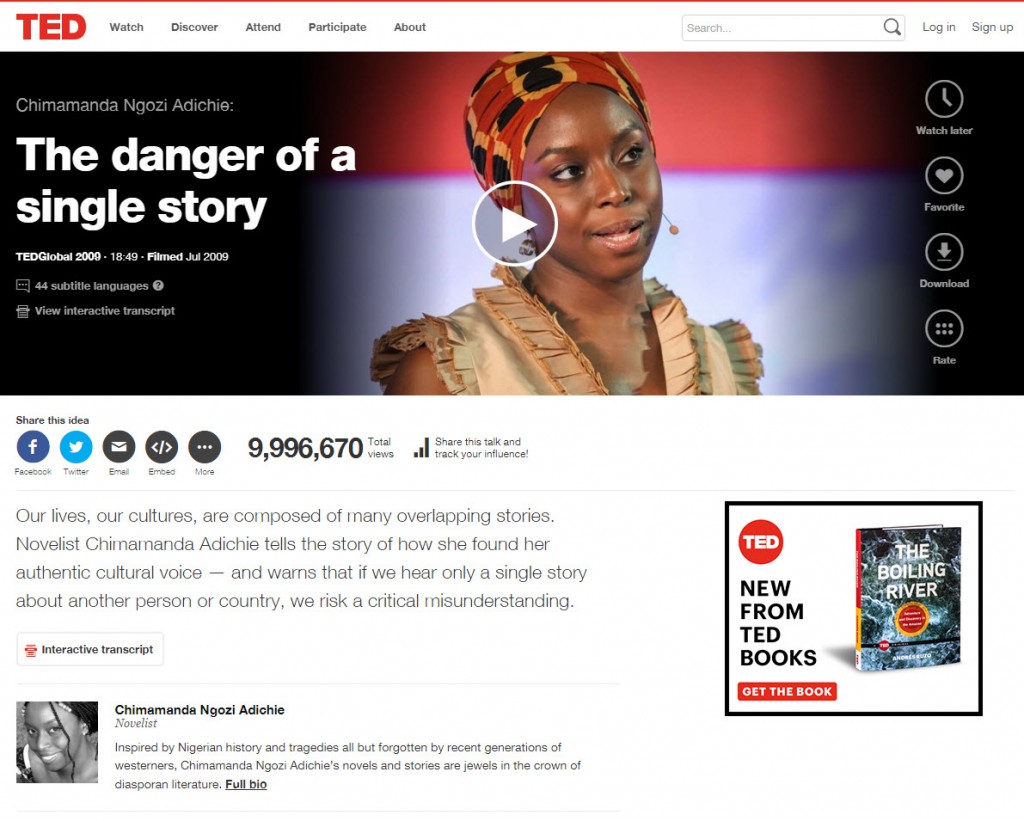 I chose to respond to this piece for three reasons.  One, I recently read Americanah, a novel written by the speaker of this TED talk and absolutely loved it.  As soon as I saw that the author was the speaker, I knew I wanted to watch the talk (this talk has had almost 10 million views).  Two, the talk is about stories, and more specifically, about how stories shape us and shape how we view the world.  And third, I’ve never watched a TED talk that I didn’t thoroughly enjoy.

This TED talk was the first one in a series of six talks on “how to tell a story.”  You can see the series here. 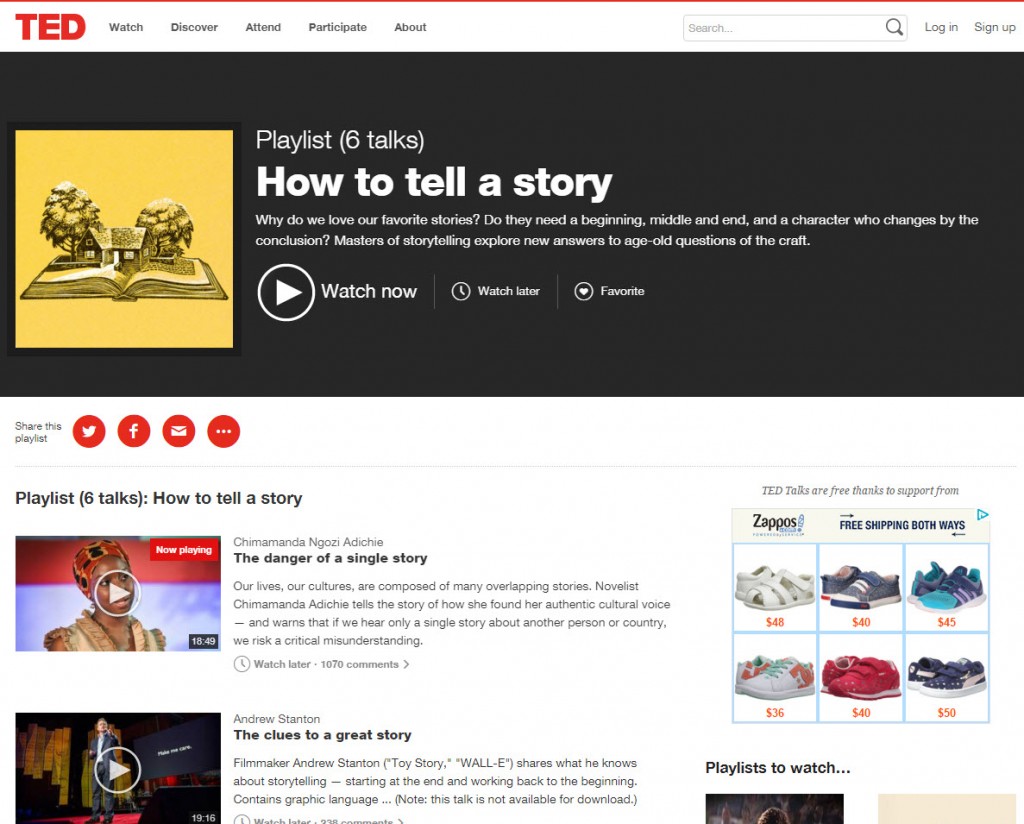 My reaction to this powerful talk was one of pure enjoyment and respect.  I thoroughly enjoyed hearing Ms. Adichie speak, especially when she talked about her own personal stories that helped shaped who she is today.  I respect her words in speaking about stereotypes, equal humanity, and the power of stories.  Although her words are powerful and true, I hate to admit that they reminded me very much of myself – as a young teenager, living in a my own single story world.

Growing up in south Florida, I learned only about my own culture – that of an American white girl who lived in what I now realize, was a bubble.   What’s even worse than knowing that I lived in such a bubble is knowing that I missed out on so many amazing cultures around me at the time (Haitian, Cuban, Seminole, etc.).  I lived thirty minutes from the beach, shopped for a new wardrobe at the beginning of each school year, and barely ever knew what was going on in the world around me.  I lacked nothing, and knew almost nothing.  I was most certainly, a single story girl, living in a single story world.

It wasn’t until I moved to southwestern Colorado at the age of 18 that think I finally learned that there was a whole grand world around me.  Living among several Native American tribes and attending a liberal arts college really broadened my horizons.  I am not trying to be harsh on myself…I know that most, if not all, teenagers live in their own worlds.  But I do wish I had grown up differently.

I wish I had grown up learning more about other people and cultures, about different types of food and music and books, about different histories.  I wish I could have experienced the richness of the world as I now know is out there.  This is the plan I have for my own child.   I want my daughter to know right away that she lives in a world of many, many, many stories.  I want her to understand what happens to be my takeaway from Ms. Adichie’s TED talk, which is something that I have always known, but maybe didn’t fully understand.  Be open-minded about the world around you and listen, watch, and experience every story that you possibly can.

Here are a few lines from Ms. Adichie’s talk that stood out to me the most (copied from the transcript here):

“When I learned some years ago that writers were expected to have had unhappy childhoods to be successful, I began to think about how I could invent horrible things my parents had done to me.  But, the truth is that I had a very happy childhood, full of laughter and love, in a very close-knit family.  But I also had grandfathers who died in refugee camps.  My cousin Polle died because he could not get adequate healthcare.  One of my closets friends, Okoloma, died in a plane crash because our fire trucks did not have water.  I grew up under repressive military governments that devalued education so that sometimes, my parents were not paid their salaries.  And so, as a child, I saw jam disappear from the breakfast table, then margarine disappeared, then bread became too expensive, then milk became rationed.  And most of all, a kind of normalized political fear invaded our lives.  All of these stories make me who I am.  But to insist on only these negative stories is to flatten my experience and to overlook the many other stories that formed me.  The single story creates stereotypes, and the problem with stereotypes is not that they are untrue, but that they are incomplete.  They make one story become the only story.”

“When we reject the single story, when we realize that there is never a single story about any place, we regain a kind of paradise.”