I am currently working my way through my third semester of the Information and Learning Technologies master’s program at University of Colorado, Denver.  This post is the tenth within a series of 12 scholarly critiques that I’ve been assigned to write for a course titled Research in ILT.

My academic partner Jason and I have developed an action research project that studies how emotional intelligence relates to learning and more specifically, how it promotes positive learning experiences.  For this critique, I decided to read and review a study from 2006 that I found from a researcher I’ve critiqued in the past.  The study is titled Developing Emotional Intelligence Through Workplace Learning: Findings From a Case Study in Healthcare and was conducted by Nicholas Clarke, a Professor of Human Resource Management at University of Southampton in southern England.  The article has been cited dozens of times (ResearchGate states 16 but other sites state many more) and despite the article’s “older age,” I am writing about this article as the study relates so closely to our own and the data collection and analysis methods are spot on with ours.  I am focusing more on the data collection and analysis methods than I am on the actual findings and study itself. 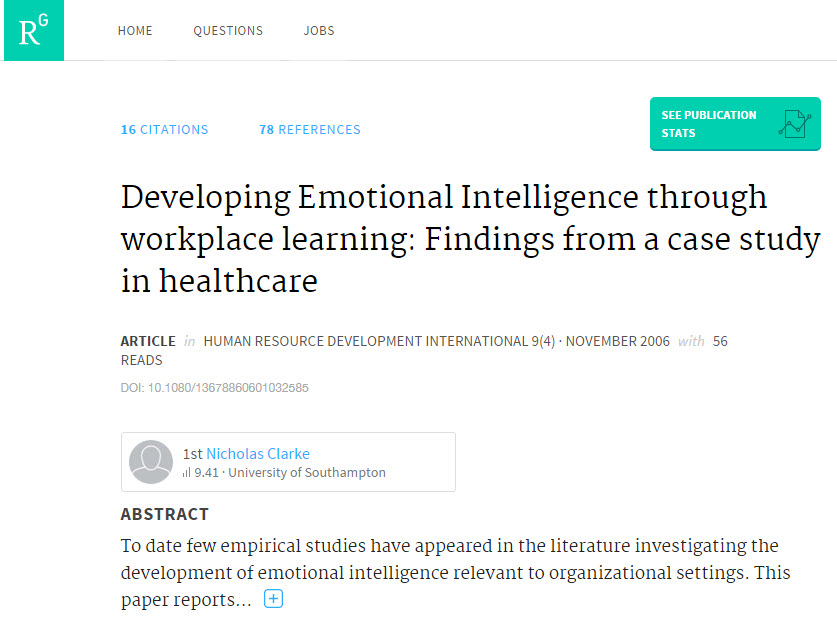 The goal of this study was to contribute to building a more theoretically grounded body of literature seeking to explain how emotional abilities may potentially develop within workplace contexts.  Clarke opens his paper, as many researchers in this field tend to do, with Mayer and Salovey’s definition of emotional intelligence (“EI”).  He then discusses team-based learning and team-level emotional ability measures and how experiential learning activities may be particularly effective in their development (p. 448).  He defines workplace learning as “the type of learning that occurs while performing the job itself or, alternatively, which takes place primarily within the context of the workplace” and discusses the importance of workplace learning and the development of EI to contribute to specific areas of job performance (pp. 448-450).

The study was performed with a case study approach, “particularly effective for exploratory research that aims to generate fresh or novel insights in areas where very little is known about the phenomenon under investigation” (Eisenhardt, 1989; Yin, 1994).  The data was obtained as part of a much wider study that Clarke had performed from 2004 to 2006 that investigated workplace learning within UK hospices (specialist healthcare organizations providing services for the terminally ill).  The data was initially collected through a survey distributed to all UK hospices and then qualitative data was obtained from two focus groups held approximately one year later.  As with our reasoning for utilizing a survey and interview method, Clarke explains that these methodologies were chosen in order to collect qualitative data from a larger number of participants during a time scale than individual interviews would allow (p. 450).

The case study findings in this article relate specifically to the nature of emotional abilities and their development as identified from the analysis of data obtained from the follow-up workshops.  Twenty-two voluntary participants (two male, twenty female) from twenty different hospices self-selected to take part in the workshops from an invitation from the researcher that was sent to all hospices that took part in the initial research (pp. 450-451).

Clarke stated that he wanted the discussion to be as free-flowing as possible with the facilitator making as little intervention as possible in order to minimize bias.  He video-taped the workshops and then transcribed the discussions.  He initially analyzed the data by reading through the whole transcripts, identifying common themes, and looking for areas where there was agreement between participants.  He then took the themes and formed the initial basis for coding excerpts from the conversations, “coding which was then revised further though an ongoing iterative process as further sub-themes and commonalities were identified” (p. 451). This method of themes, coding, and commonalities is how we performed our own data analysis.

Clarke established six main themes within his findings, two of which aligned well with our own study and some of the themes we established – reflection and psychological safety (pp. 451-457):

Clarke summarizes the findings well which align with our own:

The insights generated from the data together with some of the key findings from a few other studies to date, as reviewed here, do lend themselves towards both practical and theoretical considerations in the area of EI development – most significantly that developing emotional abilities within organizational contexts may be better achieved if managers consider strengthening social structures (Kreitner, 1999); increasing opportunities within the workplace for sharing emotional knowledge and learning; supporting opportunities for dialogue and reflection (Raelin, 2000); and creating a learning climate that enables individuals to feel safe and supported in discussing the emotional dimensions associated with their work (p. 461).