I am currently working my way through my third semester of the Information and Learning Technologies master’s program at University of Colorado, Denver.  This post is the eleventh within a series of 12 scholarly critiques that I’ve been assigned to write for a course titled Research in ILT.

My academic partner Jason and I have developed an action research project that studies how emotional intelligence relates to learning and more specifically, how it promotes positive learning experiences.  For this critique, I decided to read and review a study from 2012 that I found through a search on ResearchGate using the terms teamwork, emotional intelligence, and communication.  The study is titled Emotional Intelligence, Communication Competence, and Student Perceptions of Team Social Cohesion and was conducted by Ashlea C. Troth, a senior lecturer, Peter J. Jordan, a professor of organizational behavior, and Sandra A. Lawrence, a research fellow, all from the Griffith Business School at Griffith University in Australia.  The study relates to our own in that there are several themes in common, specifically group learning, emotional intelligence, and communication.

Troth, Jordan, and Lawrence (2012) introduce their study with a discussion on students’ perceptions of team learning.  They write about how managing and functioning within a team is a key skill employers seek and how the demand for teamwork in organizations has seen schools incorporate more team building exercises and group projects into the curriculum.  They explain that studies have proven that most students generally dislike teamwork due to the experience of poor team processes regarding issues of logistics, workload sharing, team dynamics, and leadership (Feichtner & Davis, 1984; Hansen, 2006).  All of these experiences could be mediated and strengthened with higher team social cohesion and higher levels of emotional intelligence (EI) (p. 415).

The aim of the study was to examine whether a student’s level of EI was related to his or her perceptions of team cohesion.  They explain the study as follows:

In this article, we extend research into EI and student teams by testing a mediation model of EI, communication effectiveness and appropriateness, and perceptions of team social cohesion. Establishing a link between university students’ EI and their perceptions of team social cohesion and understanding the mediating role of communication skills will enable teachers to make decisions about student group formation and develop training options to improve student group experiences (p. 415).

“We propose students with a greater ability to be aware of and manage their own emotions and the emotions of their teammates in a team setting will be more likely to experience greater team cohesion” (p. 416).
Hypothesis 1: A student team member’s EI will be positively related to his or her percep- tions of team social cohesiveness.

“Research suggests team members more capable of recognizing and managing their own and others’ emotions during interactions are more likely to engage in better information exchange and decision making (e.g., Jordan & Troth, 2004), resolve task conflict, and display less relationship conflict than individuals with lower levels of EI (Yang & Mossholder, 2004)” (p. 416).
Hypothesis 2: A student team member’s EI will be positively related to his or her commu- nication effectiveness and communication appropriateness.

“In order for social cohesiveness to emerge, quality rela- tionships need to be established within the team (Mitchell, 1986). Effective and socially appro- priate communication enhances the quality of relationships (Smith et al., 1994)” (p. 416).
Hypothesis 3: A student team member’s communication effectiveness and appropriateness will be positively related to his or her perceptions of team social cohesiveness.

“We argue that the main mechanism by which EI influences individual’s perceptions of team social cohesion is through the mediating influence of individual communication competence. To date, this link has not been theoretically or empirically explored” (p. 417).
Hypothesis 4: A student team member’s ratings of his or her communication effectiveness and appropriateness will mediate the relationship between EI and perceptions of team social cohesiveness.

The participants worked in teams (the same team throughout the entire semester) to complete a group work project.  An initial survey was distributed during the second week of the semester to assess the students’ perceived level of EI abilities within a team context.  A second survey was distributed 8 weeks later.  The team members were asked to reflect on the level of social cohesion that existed during the previous 2 months and to rate the communication effectiveness and appropriateness behaviors of each of their fellow team members during the group work (p. 417).  The surveys contained questions that measured for team social cohesion, emotional intelligence, and communication using the following:

The results of the study are presented below: 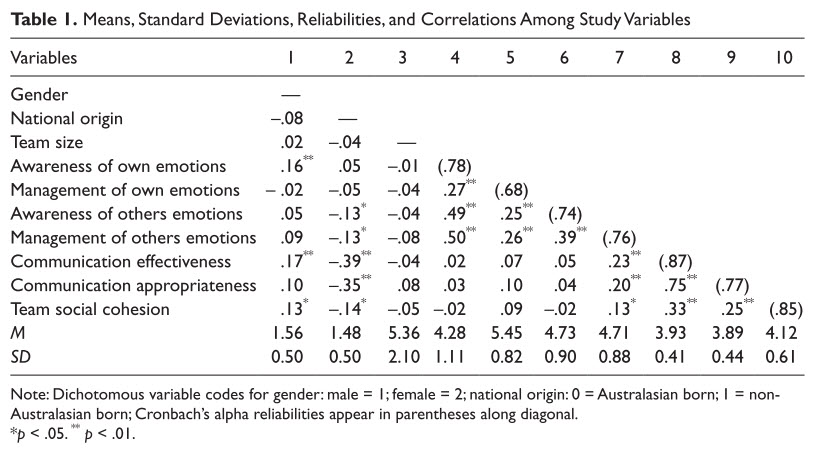 Not having any experience with this type of research, I don’t fully understand the hypothesis analyses methods, but they were explained as being tested “using Preacher and Hayes’ SPSS macros to calculate bootstrapped multiple mediation effects” (p. 418)

This study increases understanding about how EI is resourced and utilized within student teams and, via the promotion of competent communication processes, increases student’s perceptions of social cohesion. Researchers suggest team social cohesion helps individuals gain a sense of identification and maximize their potential for team performance (Deeter-Schmelz et al., 2002). The findings also contribute to existing work that explores individual and contextual factors that influence perceptions of team social cohesiveness (Mullen & Copper, 1994) and literature that suggests the EI abilities of team members are an important antecedent of team processes (Ashkanasy & Dasborough, 2003; Bell, 2007) (p. 421).

In regards to my own study, this paper provides valuable insight into how emotional intelligence relates to group learning and goes in depth on the role of communication and how it is affected by EI within teams.  This study was performed in an academic setting, but the findings hold true for a workplace setting as well.